No fair and effective distribution of goods and services:

Demand is made competitive in a capitalist economy by those who have income and are ready to spend it and not by those who need only but do not have the resources they need. The lucky few with large incomes are able to manipulate manufacturers to manufacture the products they want. On the other hand, the poor often have to go without the essentials of the life of the existence of inequality of incomes. When the poor have to die on urban footpaths, vast amounts are spent on gala feasts. Therefore, according to their needs, the capitalist system does not bring about an equal and fair distribution of goods and services among people.

Instead of perfect competition, monopolistic tendencies:

Costs, wages, and income are expected to be decided in a free market through demand and supply. In fact, however, markets are not open and competition is not perfect. A few influential producers, who are often called monopolists, decide and impact prices. For example, a monopolist may set a high price. There may be a divergence between demand and supply as a consequence of the existence of imperfect competition.

In addition, preferences and fashions can change rapidly and in some industries, there might be overproduction and underproduction in others as a result. Often, demand could have changed again by the time the required supply adjustment takes place. Therefore, capitalist output and resource allocation cannot, because of the presence of monopoly elements and also because of periodic market depression and unemployment, be successful. Under capitalism, optimum production and minimum cost cannot actually take place.

Adverse Effect on Advertisement on Consumers:

Consumers themselves can be at fault occasionally. They may require goods and services that do not provide actual value, but which may be intended to demonstrate power or prestige. They can also demand products that are dangerous, sometimes. Many times, a man winning prefers cheap. Novel detective to a decent script. People can need inexpensive films and liquor that appear to ruin their tastes and morals. In this regard, the potential adverse effects of ads on customers can be stated. It has been found possible to sell any product, however poor or inferior, through the medium of advertising. It is by an advertisement that many have had, and in an ‘open’ market economy, positively dangerous drugs and medicines and other items are sold. The autonomy of the customer is therefore lost.

Does not work properly during periods of war and shortages:

The price mechanism also takes only individual requirements into account, whereas it does not supply adequate quantities of social goods such as education, health, water, electricity, gas, telephone, post and telegraph, and transportation, etc. If any society leaves the supply of such public goods to the price system, it may be abused by the market and thus by customers.

Adoption of e-commerce in Agribusiness: Challenges and Opportunities

Components of a strategic marketing plan for Agribusiness 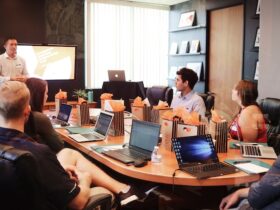 What is Human Resources Development for Agribusiness?